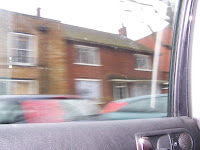 Liz was free. Free from her parents.

The train ran quietly across London’s suburbs. On the seat in front of Liz’, a couple of young travellers were watching the scenery.

They were holding hands. They both were dressed in a kind of neo-hippie fashion ; the woman, tall and thin, had her blonde hair done in dreadlocks. Liz had spotted the heavy backpacks they were carrying along with them. The way they had barely watched at the signs in the train station, moving along as if they had all the time in the world, Liz had understood they were real travelers – the kind who had probably tripped around the whole world once or twice.

They weren’t watching her – and that was better, believe me. They could have noticed the blush on her cheeks. For Lizzie was ashamed : her parents had insisted much on taking her to the train station (she could have got there by herself), and, worse, to stand on the platform until the departure. They had even waved at her while the train started.

Mum had sent her kisses – how embarrassing…

I remember how I felt when I boarded the Stansted express.

I was free, free at last. Free from my parents.

As the train departed, I lost sight of them, waving at me from the quayside. Instead, I could see my own reflection on the window glass. Red shirt, neat bermudas, brand-new cool sunglasses : I looked great.

I glanced at my shoes, black Converses with a shiny white leather linen ; how trendy was that ? From my backpack, I took my I-pod – last model, of course, though it had been a pain convincing Dad and Mum I neeeeeeded it. Especially after the hair thing.

Oh, my parents haven't said much about it. Only Mum had looked at me with her usual pain-and-comprehension-mixed expression, and had said : « Oh, Liz Mc Callum, do you really think this will be of any help with your teachers and friends ? »

Well, I didn't have to tell her what I thought about my teachers ; and as for my friends, hey, what ! They were quite jealous of me. Good, isn't it ?

Dad had shooked his head.

« Liz, puppet, you know what I think of this kind of eccentricity. It's not doing you any good too seek to express your so-called personnality through clothes and haircuts. »

That's Dad kind of phrase. You have to look in a dictionnary to understand the words. But the meaning, yeah, I got that all right : I had no personnality. Thanks so much, Dad. Nice to feel your support.

Well, at least he was talking to me, wasn't he ? Most of the times, he doesn't. He's travelling, you know. For his job. So I don't see a lot of him (which is fine by me, if I may add). Instead, and because he always says Communication Is Important To Drive Teenagers To Adulthood And Independency, he writes memos.

When I get up, for example, I may find a 4'4 card on the kitchen table, saying something like « Mum coming back late, you can eat on your own », or « Maths examination today – You're still in time to read it over once again ».

I can't think of a better way to ruin someone's breakfast. Sometimes I feel like scribbling back on his notes. « Sorry, Dad, am only 14, don't know how to read », or « Math teacher mugged yesterday by a bunch of angry pupils – no exam today ». Then I don't, of course. I'd be on for a Long Serious Conversation as soon as he'd got back. Well, no, thank you...

Parents, you know. Seems you can't breathe without them telling you to do it differently.

Jeudi, not much to say 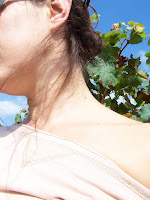 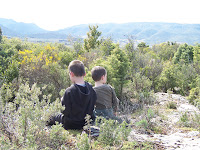 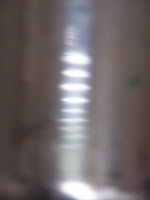 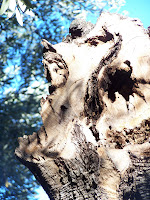 - Alice, what do you think those picture represent ? »

I swear I don’t scream. It’s the storm. It must be the storm.

I hear Alice fumbling in the kitchen. I get up, go to the window. I look outside. It’s a reflex, believe me: I just jump to the only piece of light I see. The darkess, outside, is less fearsome. A half-moon enlightens the scenery ; I can see the trees, the big cypress in front of the house (my god, how menacing it looks), the path leading through the hills – why do I think now of a black, oily snake ?

Alice lights a candle. My night vision go blurred. I can’t see anything but the kitchen now – whe did she do that ? I swear there was something moving outside. 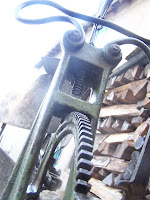 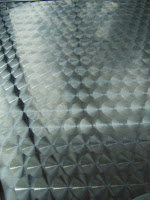 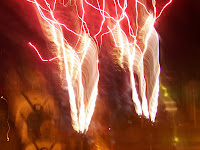